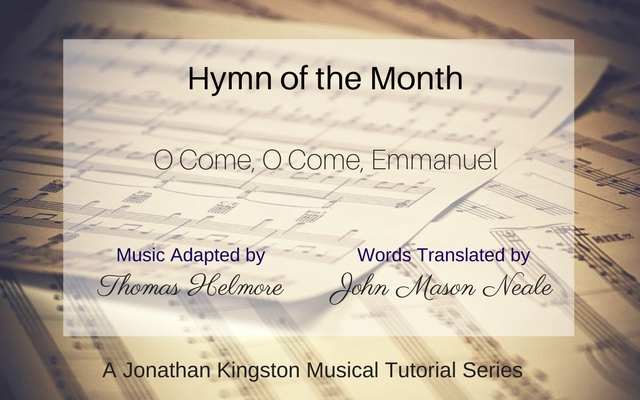 Decembers hymn is the much-loved Christmas carol “ O Come, O Come, Emmanuel ”. The words were originally written in Latin text and combined from various antiphons by an unknown author, possibly in the 12th Century. The Latin text was translated into English by John Mason Neale in 1851. It is believed that the melody was of French origin and later adapted by Thomas Helmore.

Thomas Helmore (1811 – 1890) adapted the tune and published it in Part II of his The Hymnal Noted (1854). The volume listed the tune as being “From a French Missal” in the National Library, Lisbon. As Helmore didn’t provide any means of verifying the source, some doubts of its attribution still remains.

In 1966 British musicologist Mary Berry discovered a 15th-century manuscript containing the melody in the National Library of France. Whether this particular manuscript was the actual source to which Helmore referred is difficult to say. The Hymnal Noted referred to Lisbon, not Paris, and to a missal, not a processional. Berry raised the possibility that there might exist “an even earlier version of” the melody. The ‘mystery’ still remains!

Thomas Helmore was born in Kidderminster, Worcestershire, and was amongst many things a choirmaster, writer, author and editor of hymns and carols. He was a graduate of Magdalen College, Oxford. He was later ordained a priest in the Church of England, but his main contribution to the church was in music. He was also precentor at St. Mark’s College, Chelsea and master of the choristers in the Chapel Royal for many years.

This hymn, originally in Latin, takes us back to monastic life in the 8th- or 9th-century. Seven days before Christmas Eve monasteries would sing the “O antiphons” in anticipation of Christmas Eve. The Latin metrical form of the hymn was composed as early as the 12th century. John Neale discovered the Latin hymn in the appendix of an early 18th-century manuscript. Neale’s 1861 translation from Hymns Ancient and Modern is now the most prominent by far in the English-speaking world.

Neale (1818 – 1866) himself was an Anglican priest, translator, scholar and hymn writer. He was born in London and educated at Sherborne School and later at Trinity College in Cambridge. Already at the age of 22 he was the chaplain of Downing College, Cambridge.

Neale is a renowned hymn writer, having enriched English hymnody with many ancient and mediaeval hymns translated from Latin and Greek. He made English-speaking congregations aware of the centuries-old tradition of Latin, Greek, Russian, and Syrian hymns.