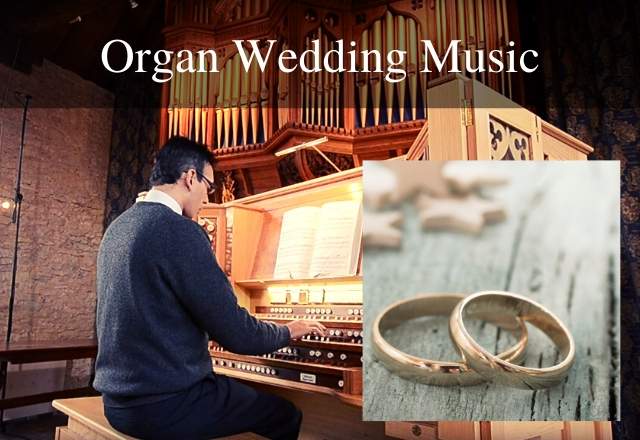 You’ve started planning the details of your big wedding day – congratulations! When thinking about organ music for the church service itself most people have in mind some hymns they know and like, perhaps remembered from schooldays; but the world of the organ and its music can be a closed book to many. If you’re unsure about choosing suitable organ music, we hope our following suggestions will help.

There are usually three points in a wedding service where organ music is needed:

The good news is, for the entry and exit, you may already know the odd wedding piece which has become traditional, without realising it.

(If you’re an organist looking for tips on what organ music to play during a wedding then look at our Organ Tutorial Series for Wedding and Memorial music.)

A. Organ Music for Entrance of the Bride (wedding processional)

In most cases, walking down the aisle doesn’t take every long, so you may only need a short organ piece, or part of one. We suggest that one way to find the right piece might be for the bride to think how she might be feeling when about to walk in; or what atmosphere she would like to create for the start of the service, as music can help this.

Below are six of our suggestions for organ music during the wedding procession and entrance of the bride.

1. The “Bridal Chorus” from the opera Lohengrin – Richard Wagner

The most traditional and well known of wedding entrances, although it was originally sung in an opera it’s now always played on the organ. The slow and stately feel may help to relax the nervous, though the popular association of the words “Here comes the bride…” may be a disincentive.

Another sedate piece, and quite quiet, it’s a good accompaniment to making an elegant, dignified entrance into the church. Originally form a suite of orchestral music.

Again, this is slow and stately, but grander than the previous two suggestions. It’s known by both the above titles, and you don’t need to find a real trumpeter! Not to be confused with Trumpet Tune (below), it is also appropriate for leaving the church at the end of the service.

This piece is jollier and more bouncy than the Clarke and, again, you don’t need a real trumpet. It might be a good choice if you would like the service to feel upbeat right from the start. Alternatively, it may also be used as an exit piece.

Known by both the above titles, we think this piece is unusual in being both stately and uplifting. An arrangement of it is used as the theme tune to the Eurovision Song Contest.

6. Arrival of the Queen of Sheba – George Frideric Handel

Another upbeat piece taken from a larger choral work. This was originally played by an orchestra. It’s fast and jolly and is a Classic FM favourite. For organists – please see our organ performance tutorial on Arrival of the Queen of Sheba.

B. Organ Music for Signing of the Registers

This part of the service can take up to ten minutes, especially if photographs are being taken as the registers are signed, so more than one musical item might be needed.

The following eight pieces are our suggestions for organ music during the signing of the registers.

Originally written as part of one of Bach’s many choral cantatas, this piece was popularised as a piano solo, published in 1926, by the famous pianist Myra Hess. It could also be sung as an anthem if a choir is going to be available at your wedding service. If you’re an organist looking to play this piece for a wedding then check out our organ tutorial for Jesu, joy of man’s desiring.

The slow movement from an orchestral suite, this piece has existed in many different arrangements and is beautifully lyrical.

Another cantata movement, this time originally written as a soprano solo.

Although Pachelbel wrote many organ pieces this, his most famous work, was originally written for stringed instruments.

Originally a song with piano accompaniment, this beautiful melody and harmonies makes an attractive organ solo. A translation of the original French text is here: www.oxfordlieder.co.uk/song/15

An arrangement of a vocal solo, and a good choice for those for whom the words are meaningful. Gounod added the beautiful melody on top of a piano prelude by Bach.

Another song arrangement, this is attractive alternative to the Gounod setting.

If you’d prefer a selection of short, mainly lively pieces, you can’t really go wrong with the Water Music. Your organist may include the slower Air, mentioned above, for contrast.

When you’re leaving the church, and taking the first steps together as a married couple, you’ll want music which will create a celebratory end to your church service. We have compiled ten suggestions for organ music during the wedding recessional.

1. “Wedding March”, from A Midsummer Night’s Dream – by Felix Mendelssohn

Perhaps the most famous of wedding pieces, the Wedding March is often chosen alongside the Bridal Chorus by Wagner.

2. Trumpet Voluntary / Prince of Denmark’s March – (see Entrance of the Bride, above)

3. Trumpet Tune in D – (see Entrance of the Bride, above)

A loud, effervescent piece from Paris, with driving rhythms and dramatic bass lines. This was popularised by being chosen for the weddings of Princess Alexandra in 1963, and Princess Anne in 1973, and remains a favourite today.

An alternative to the Purcell Trumpet Tune, in a similar lively style.

6. Triumphal March on “Nun Danket “(Now thank we all our God) – Siegfrid Karg-Elert

A grand and flamboyant piece based on a hymn-tune so well disguised you might miss it – but the result is magnificent!

Despite its title, this was never a vocal piece, but was actually written as an organ solo.

Unfamiliar outside the organ world, Guilmant played at the grand Trinity Church in Paris. Although in waltz-time, the grand style of this piece stops it being a dance and turns it into a celebration.

9. “Alla Hornpipe” from the Water Music – by Handel

Perhaps the most joyous movement of the Water Music set, the original featured trumpets and horns, and it makes a very uplifting processional piece.

Another rousing piece in similar celebratory style to the Widor Toccata. Vierne was famously organist of Notre-Dame Cathedral in Paris.

We hope that you found our suggestions for organ wedding music helpful and maybe you’ve selected some of the tunes above for your own wedding.

Please leave a comment below to let us know your own favourite wedding music for the organ or what music you had during your wedding.